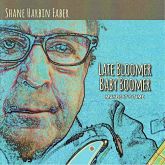 Debut 70's-Inspired Album by Producer of 90s GRAMMY Rap Hits would like your reviews. Shane Faber – who was the go-to producer, engineer, and mixer for many of the 1990s recordings of such pioneering rappers as A Tribe Called Quest, De La Soul, Queen Latifah, Biz Markie, and GRAMMY winners Digable Planets – has just released his debut solo album, "Late Bloomer Baby Boomer". Faber wrote, produced, and engineered the album, and also sang and played guitar and drums on... Read more →

Learn how to get products you can review here.

How to Get Free Podcast Interviews PR Directory: